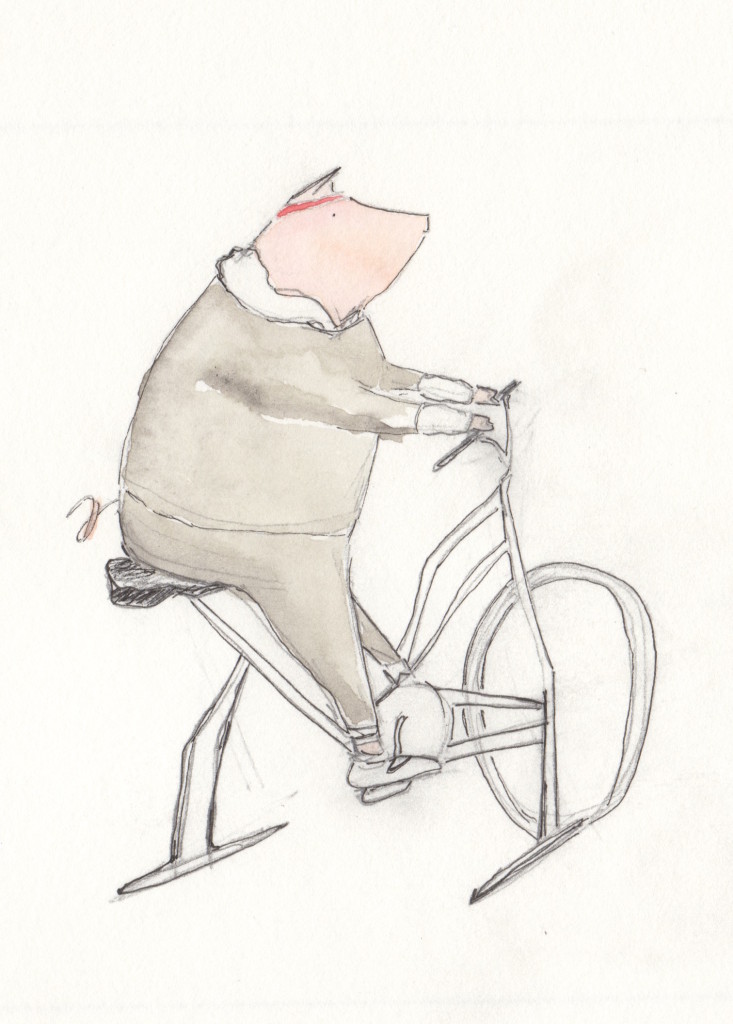 Like many, Henri often starts the new year hoping he will improve his routines. Exercise for one.

He does a bit of the stationary bike, since he is not one for actually riding a moving bicycle unless it involves a picnic in the French country side with a baguette, brie and no moving cars for as long as the eye can see…

He also alternates between a vigorous walk and a light jog. 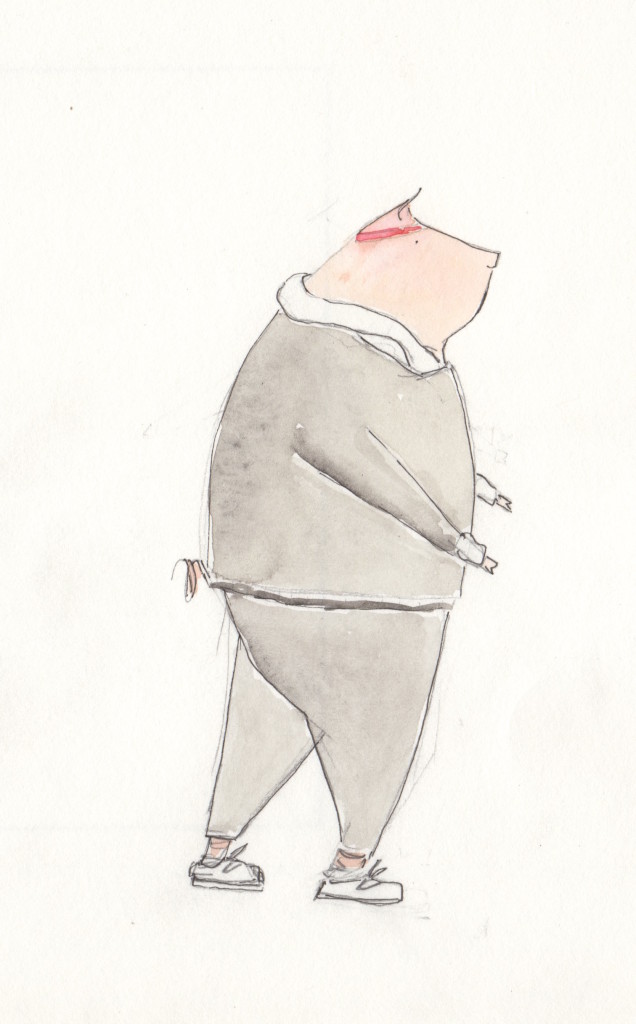 Lately he has been trying to do more yoga to increase flexibility. 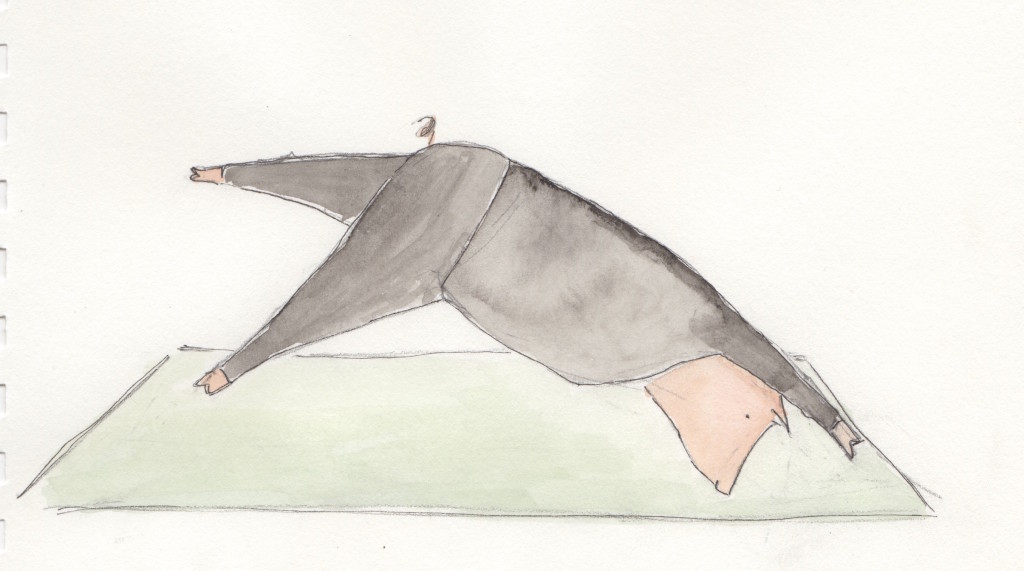 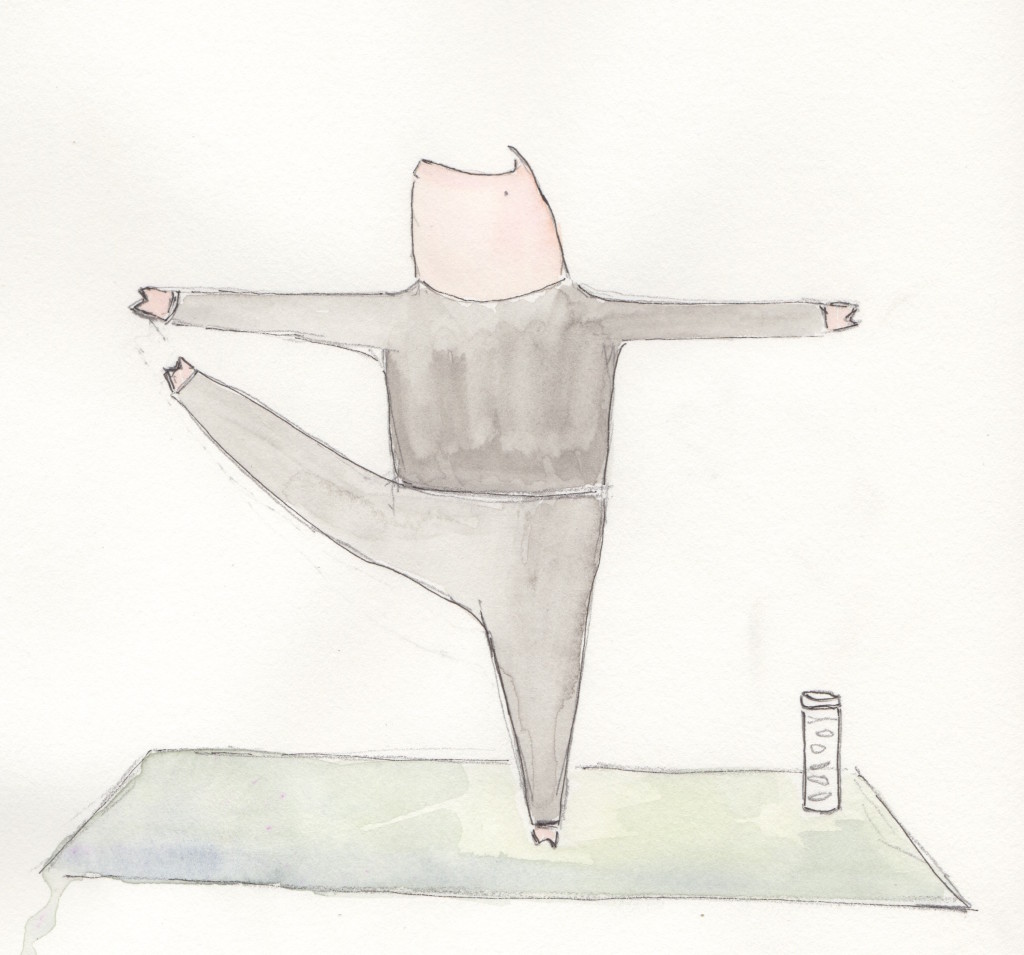 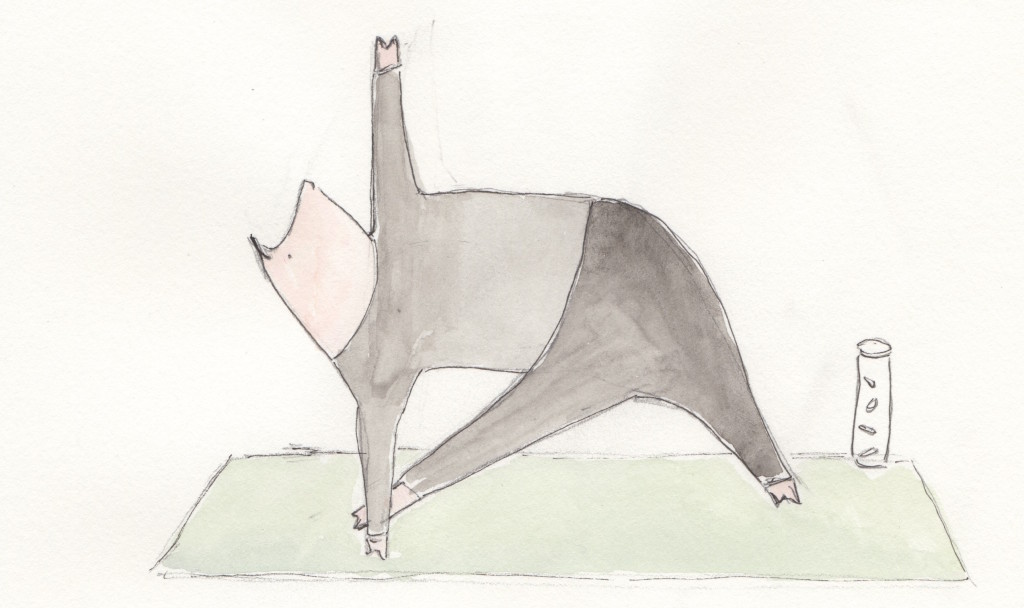 Henri loves a good stretch. He does all he can to try to remember the poses. Downward dog, triangle, warrior two. 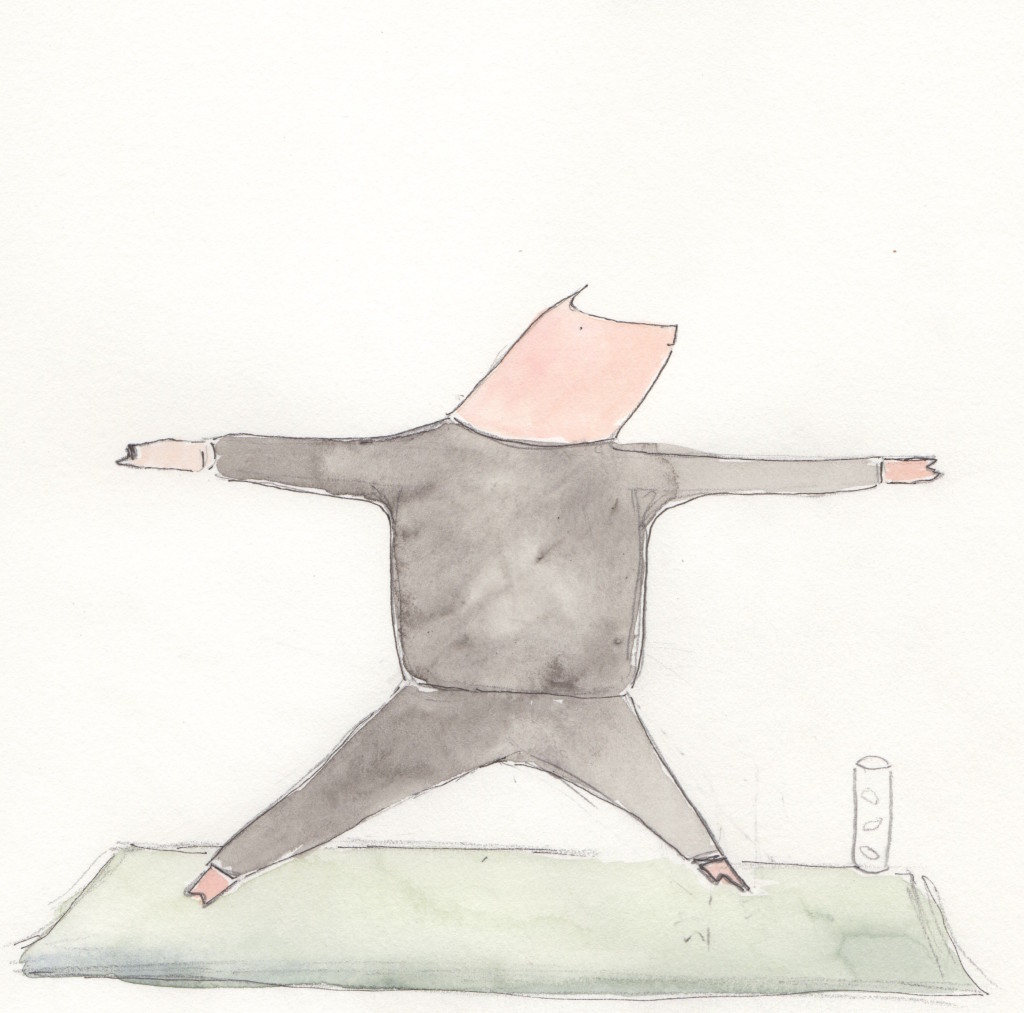 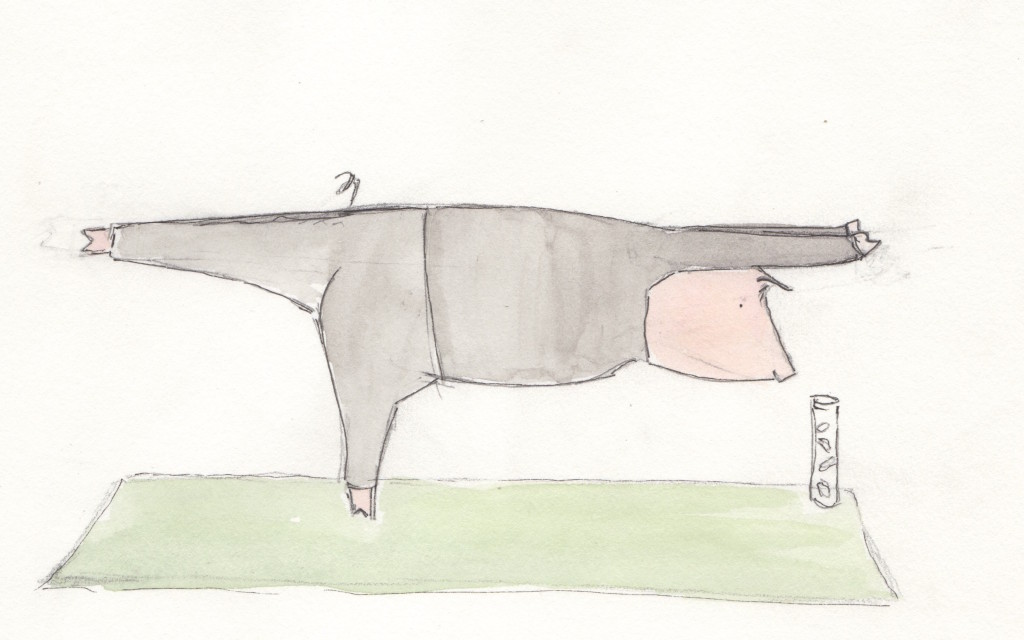 After his workout, he does indeed feel like a warrior and quite healthy, especially as he “rewards” himself with a green juice. Only to return home with the promise of a slice of cake and buttercream frosting. The cherry is a piece of fruit, after all. 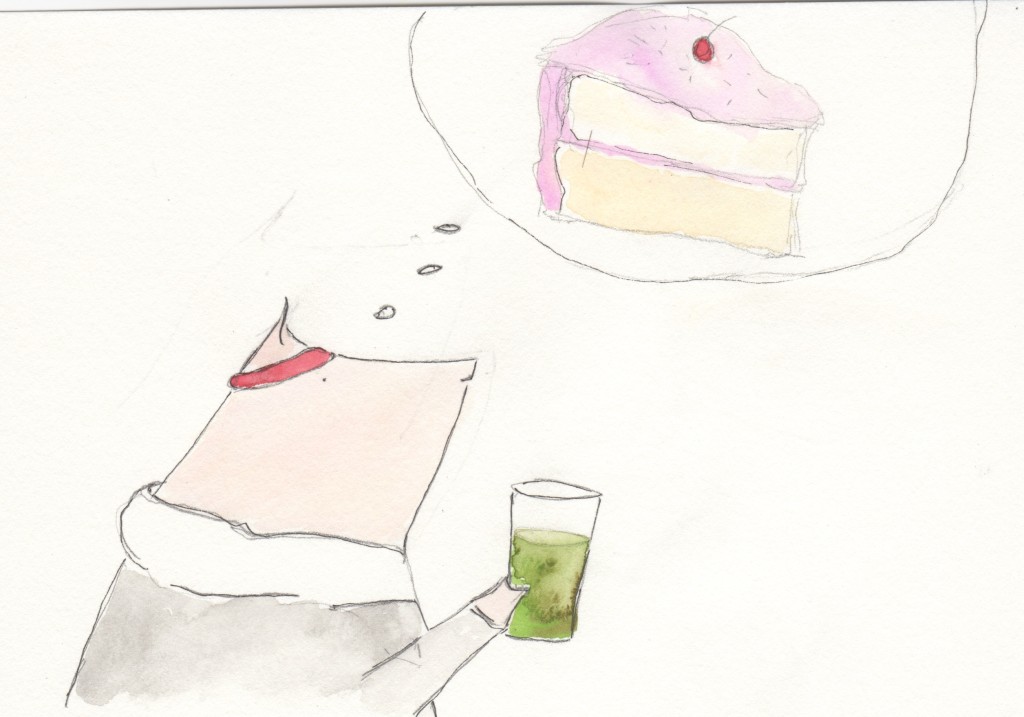 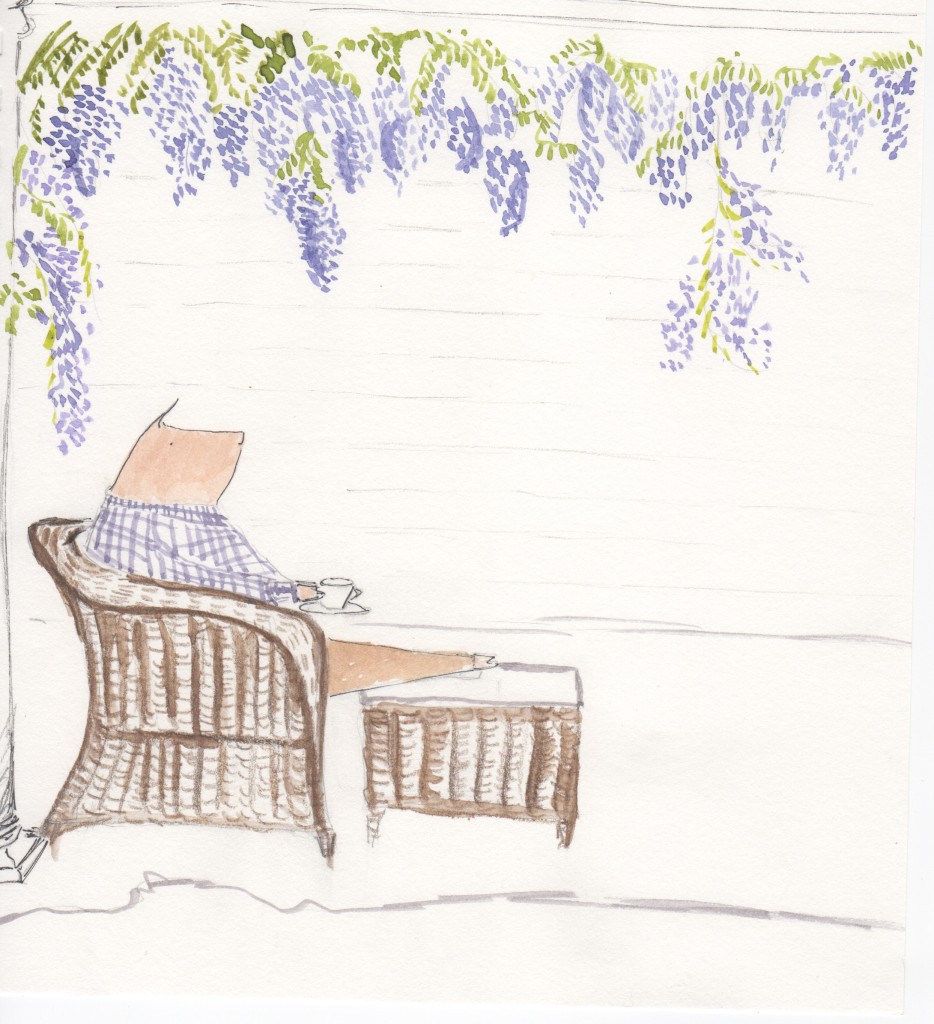 With spring in full charge, Henri takes a moment to enjoy a spot of tea under a bough of Wisteria. 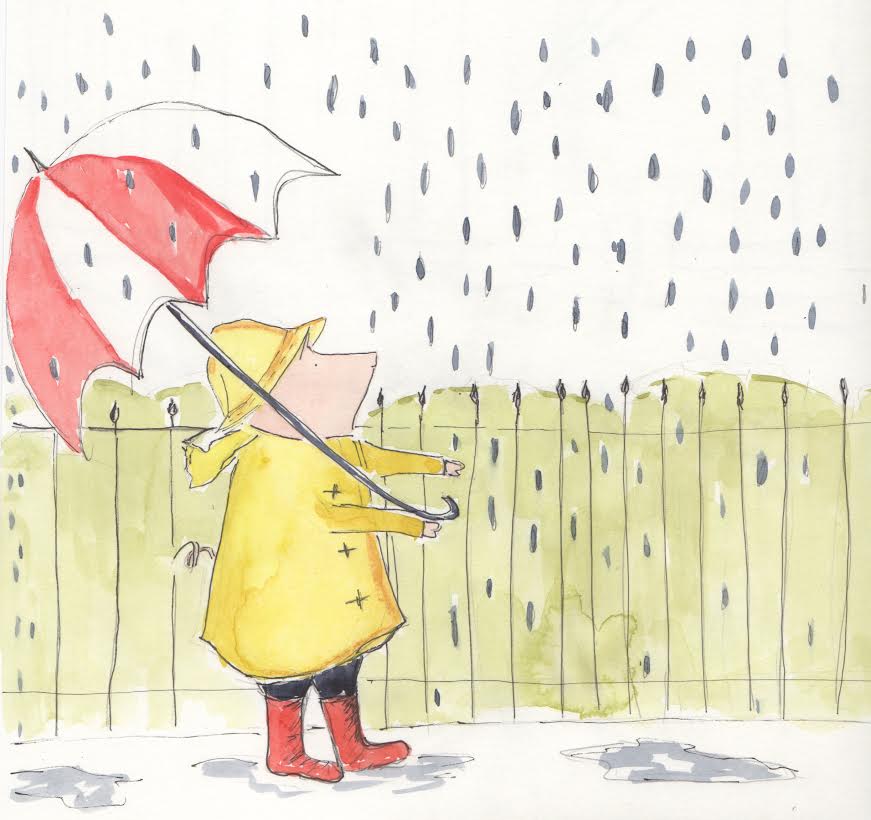 Rain is nonstop for Henri. He is hoping that this year, March showers bring April flowers…

Normally, Henri resists the over commercialization of holidays. He ignores the hype as long as he can, but then eventually gives in and indulges. Here are four reasons that Henri secretly loves Valentines… 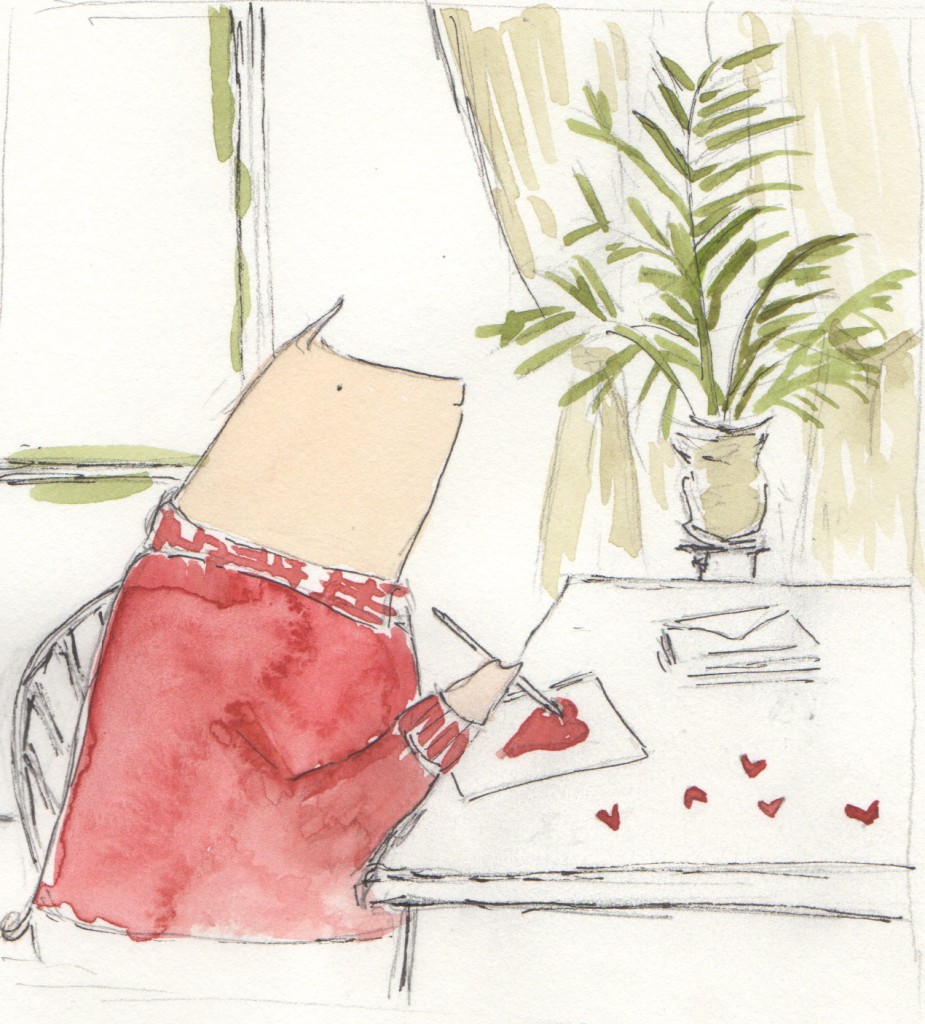 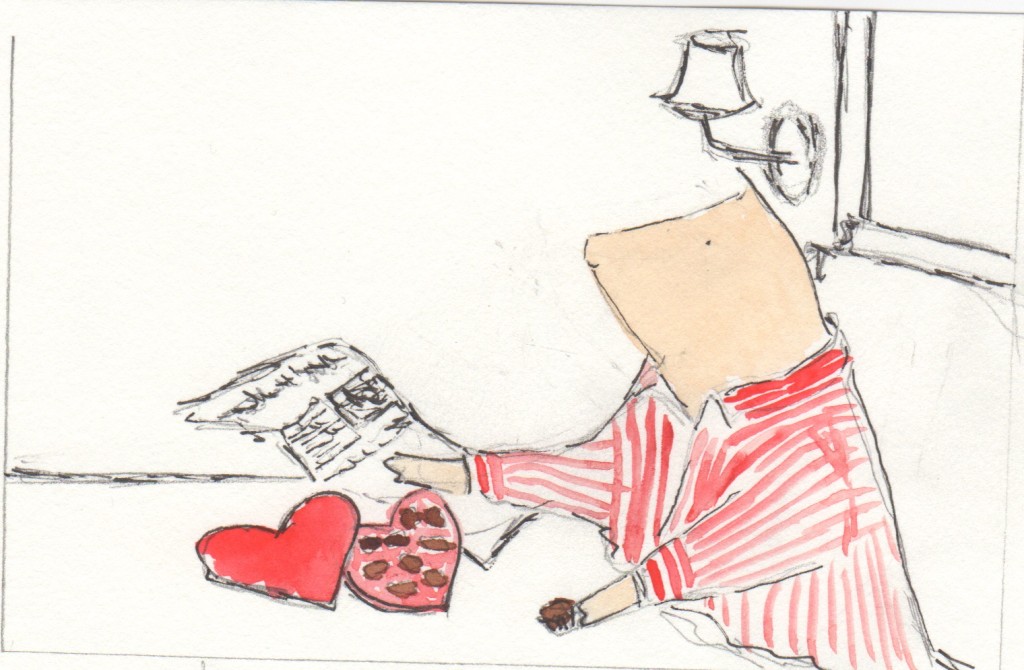 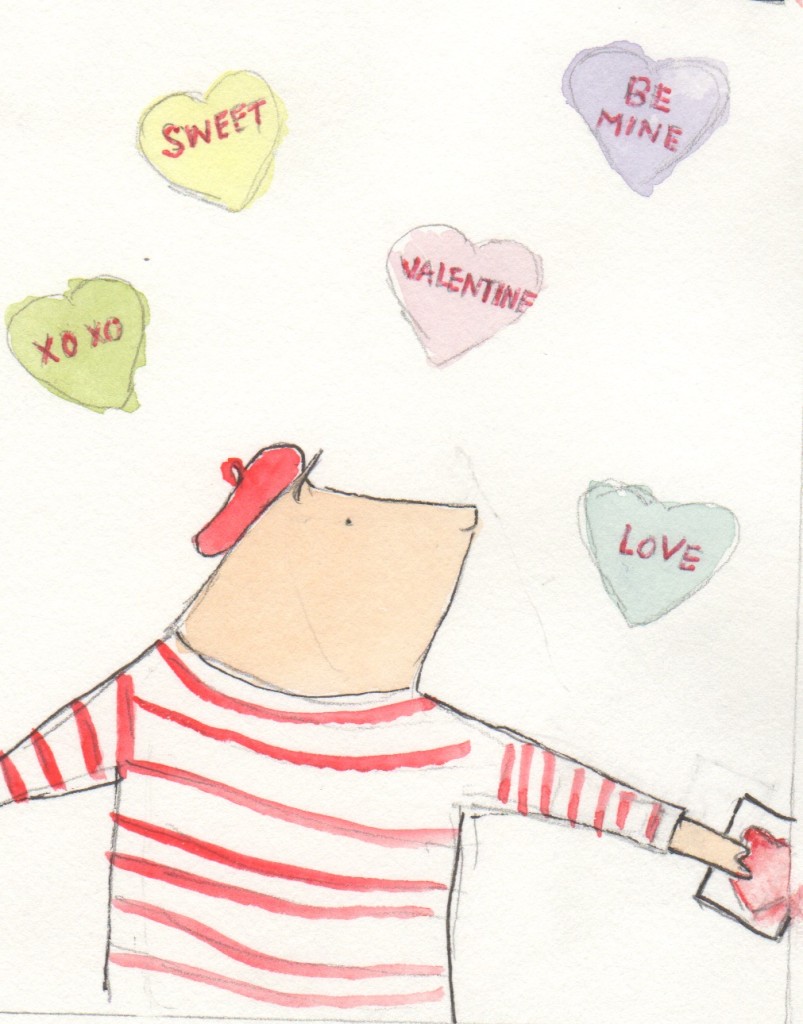 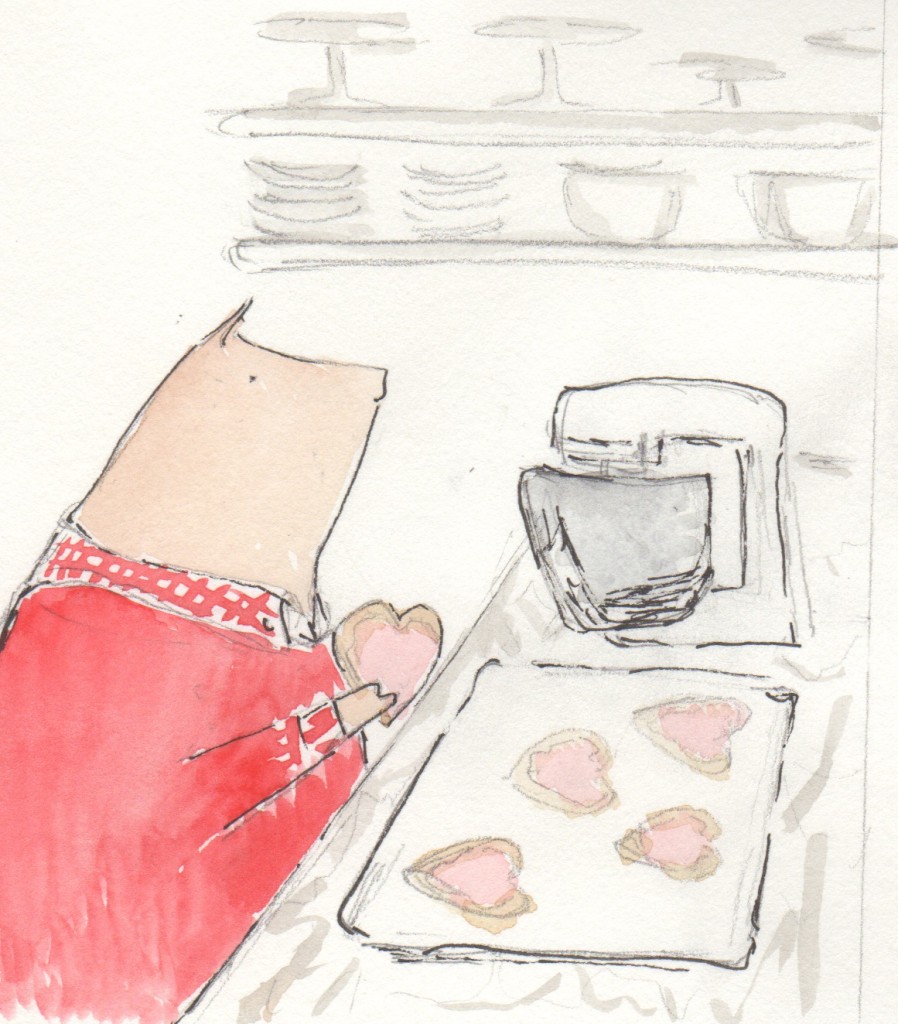 An excuse to make sugar cookies and indulge in buttercream frosting 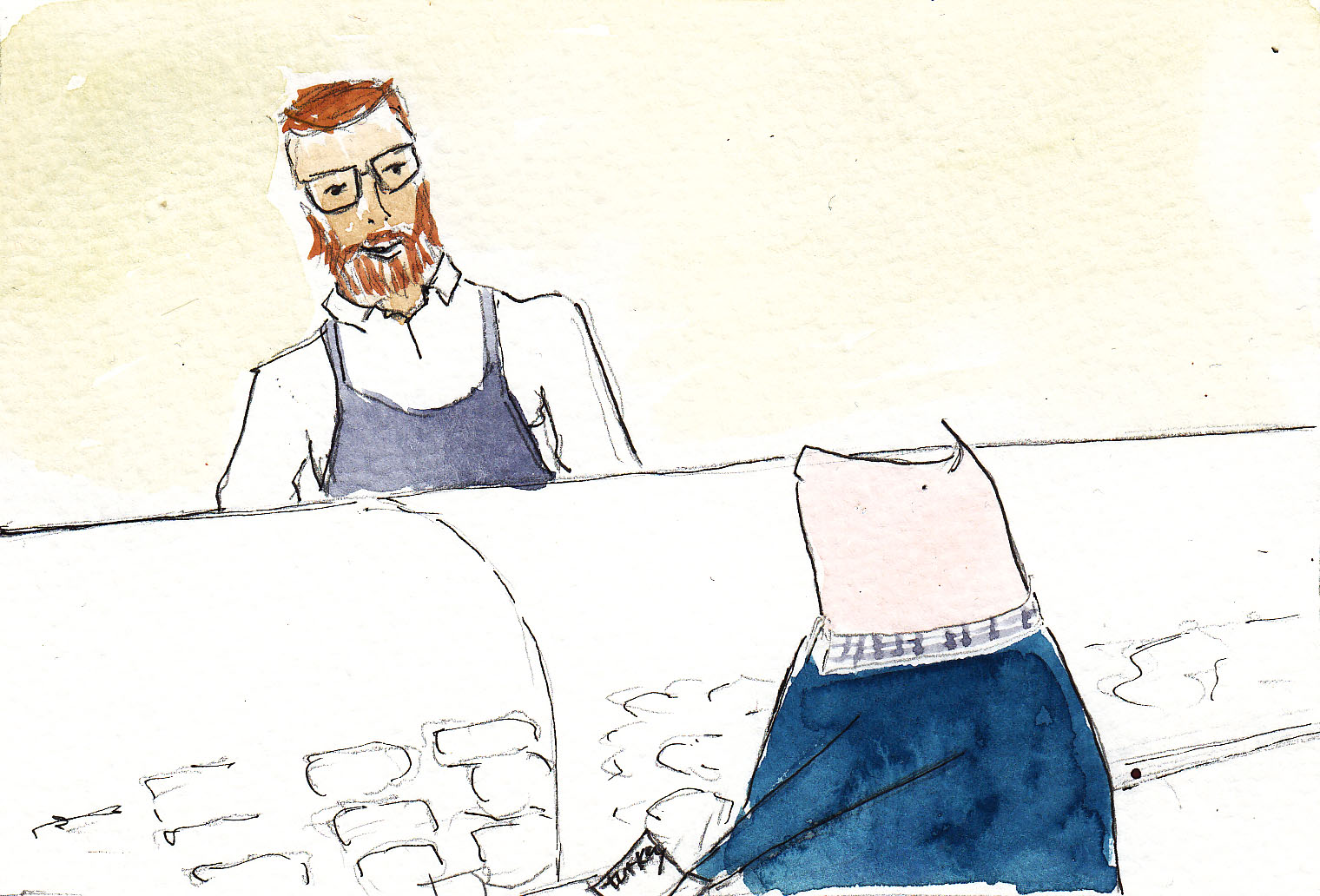 As he perused a noted grocery store in a hip neighborhood a week ago or so, Henri started to think about Thanksgiving and how he was going to prepare his turkey. He was planning to host a small dinner, nothing too over the top. He was proud of himself for thinking ahead, as he often will leave things to the last minute.

He moseyed over to the butcher counter, took down a pamphlet, and began reading up on the various types of turkeys available.

I thought it would be simple. I would just order a turkey. But there are so many kinds, Henri thought to himself.

“Have a question?” a voice warmly asked from behind the counter. Henri looked up to a gentleman with a beard and glasses.

“Yes, thank you…I’m trying to decide which turkey to order for Thanksgiving.”

“I’d be happy to help you with that.”

I should hope so, Henri said to himself, as the man beamed, and then began describing the different turkeys.

“Well the most basic we have is the free range turkey.  Those are of course, free of hormones and antibiotics, have consistent access to the outdoors, roam freely, and have been fed a vegetarian diet.”

“A step up would be certified organic. They are a level just beyond free range. Their diet is organic, but they also roam freely, have regular outdoor access, and are free of hormones and antibiotics.”

“Hmmm…so many choices,” said Henri. “Which do you recommend?”

“Well by far, the best turkey is the Heritage turkey. Their whole lives are spent on a farm, where they have the freedom to move as they please, graze on a grassy pasture free of pestisides, and enjoy an all natural vegetarian diet with no GMO’s. They are descended from one of the original five heritage turkey breeds. Of course, they’ve never been given antibiotics or any other hormones, and because of their lineage, the turkey will have bigger legs and leaner breasts.”

“Thank you for the information. I will think about it and then decide,” Henri reasoned. He looked around the store a bit more, sampled some local cow’s milk cheese which he then bought along with a baguette, and decided to head home.

Henri was not one to scrimp on important occasions. After some thought, Henri decided on the Heritage turkey. He said it’s the best. So it must taste the best and hopefully, be easy to prepare.

“Please give me your absolute finest, freshest, Heritage turkey,” Henri said on the phone when we telephoned the store.

“Actually, we just received word that we will be getting in a small, curated batch of Heritages,” the clerk said excitedly.  “They are the freshest possible birds you can buy, have never been given any hormones, antibiotics or vaccines, and have lived full, happy lives on a ranch within a twenty mile radius of our shop.”

Feeling accomplished to have that item checked off his list, Henri planned the rest of the meal: pies he would buy, mashed potatoes, dressing and green beans with crispy onions on top. His friends were bringing the rest. And of course good wine and champagne. One could never have too much of those.

A week later, as Thanksgiving drew closer and soon his turkey would be delivered, he started to look closely at the instructions on how to prepare the Heritage turkey. 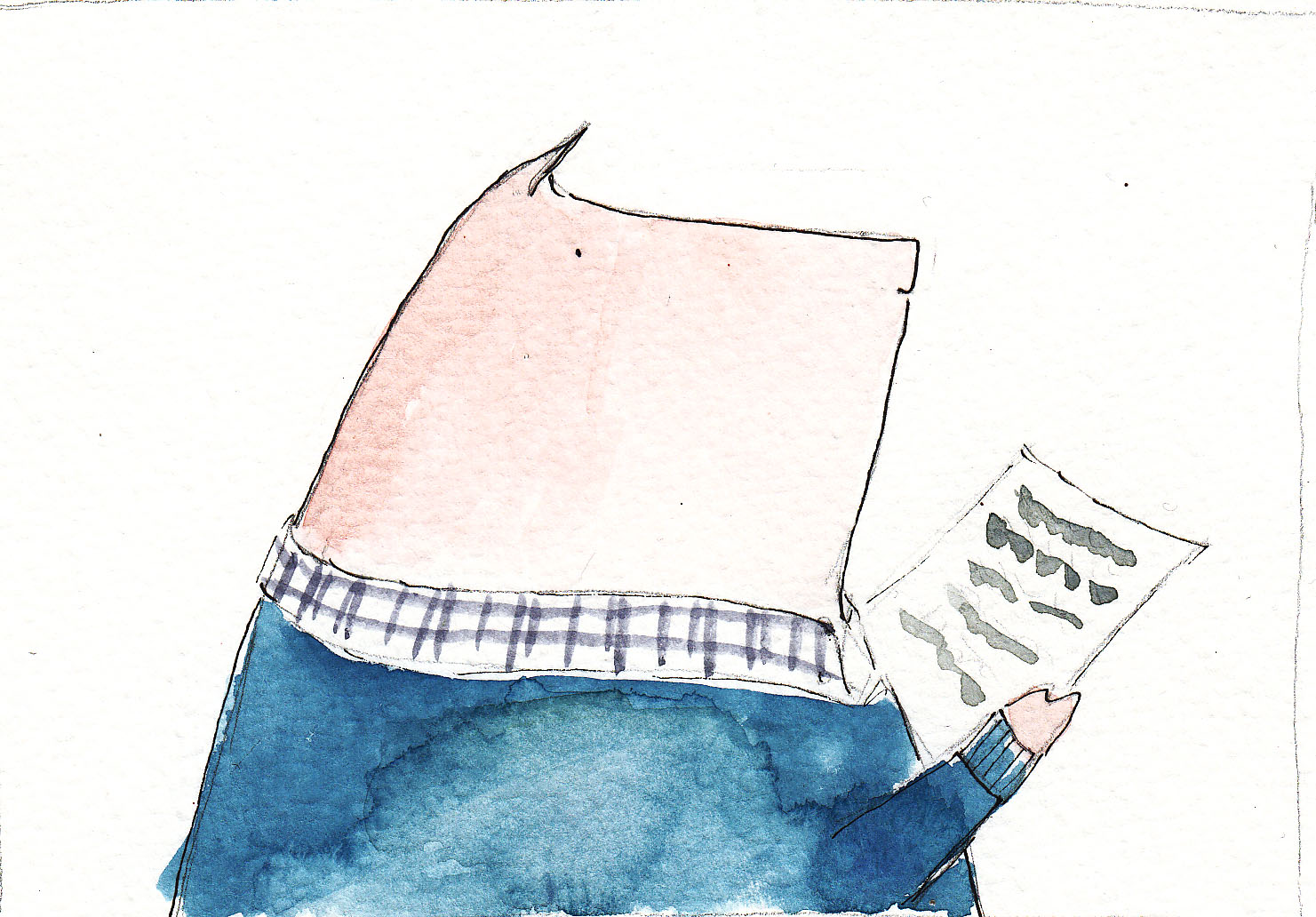 “Preheat oven to 475. Have turkey be at room temperature…”

All normal so far, thought Henri.

“Roast for 20 minutes with breast up. Tie legs together. Lower temp to 350 and cover turkey with tin foil. Once thermometer registers 150 on inner thigh, after two or three hours, depending on size, take turkey out, cut off legs and thighs, carefully keep skin intact. Take out breast and return legs and thighs to roasting pan.”

Oh no, thought Henri. This is about nine steps too many. What happened to the dramatic moment of pulling the whole turkey out at one time? And then cutting it all up at once? Now I have to put part of it back in?? And cook it longer? What about the rest getting too cold?!

Oh dear, he thought, I’m in quite a pickle.

This is just too much. I’m going to have to redo the order and get one of their more normal turkeys, whatever that may be. He reached for the phone, looked up the number, and dialed the market. 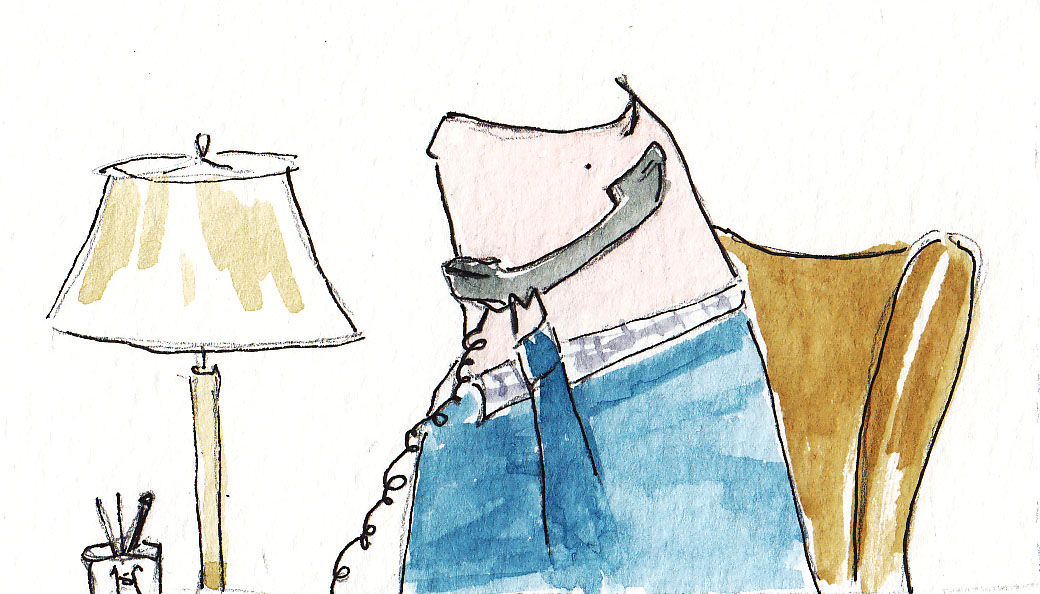 “Hello?….Yes, this is Henri. I ordered one of your Heritage turkeys, and I’m afraid-”

Henri was about to explain that he planned to change the order and get something else instead. Before he could go on, the clerk said,

“Oh Henri, yes, you must be calling about your order. Your heritage turkey is on its way! In fact, it should arrive very soon.”

“Hang on just a moment please,” said Henri politely as he set the phone down and went to go see who was at the door.

“Hello, we have a heritage turkey for Henri. You ordered the absolute, most fresh turkey we have,” announced the delivery girl proudly.

Just as Henri was about to say he had changed his mind, his turkey marched right into his flat. 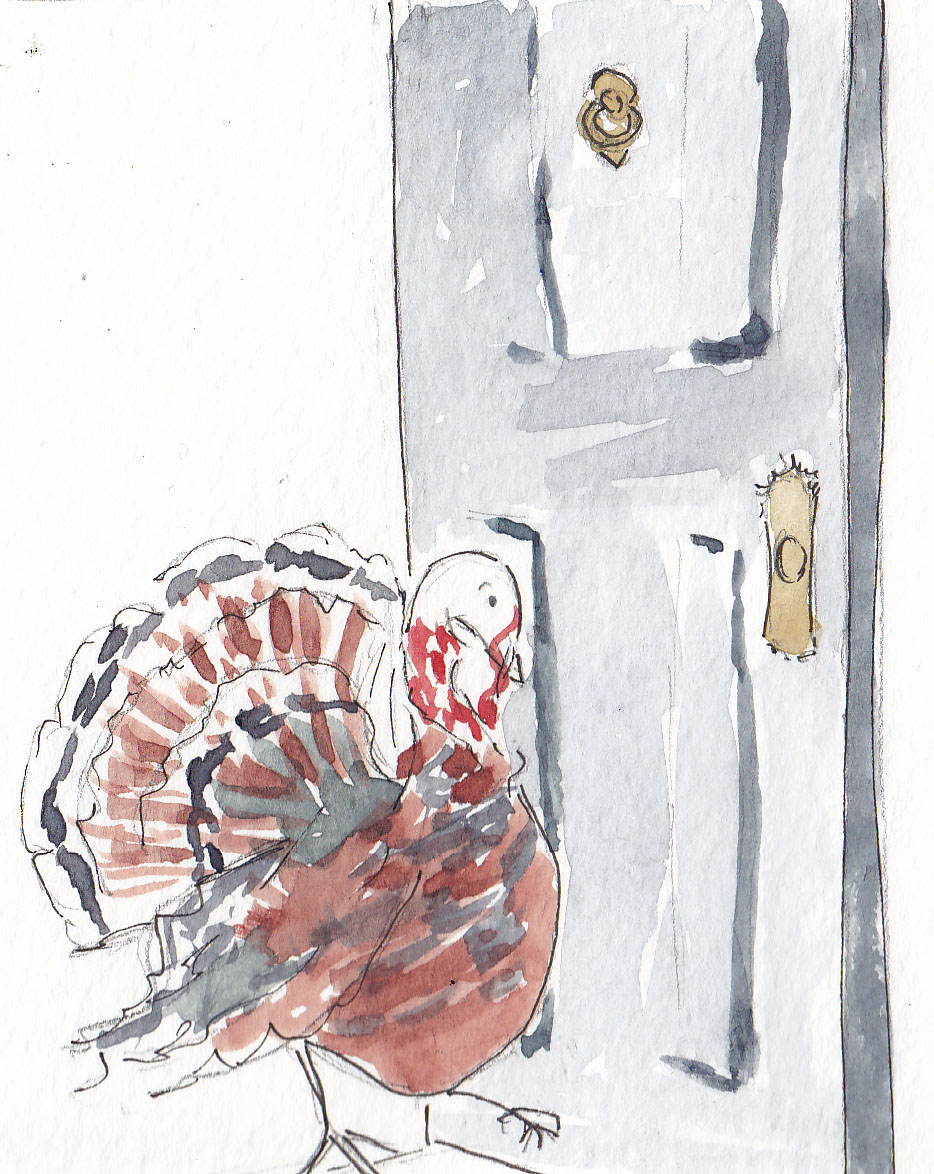 He tipped the delivery girl, and went back to the phone.

“Hello? Yes, about that order…do you happen to have any of that non-GMO vegetarian organic feed? I think I’ll be needing quite a lot actually.” 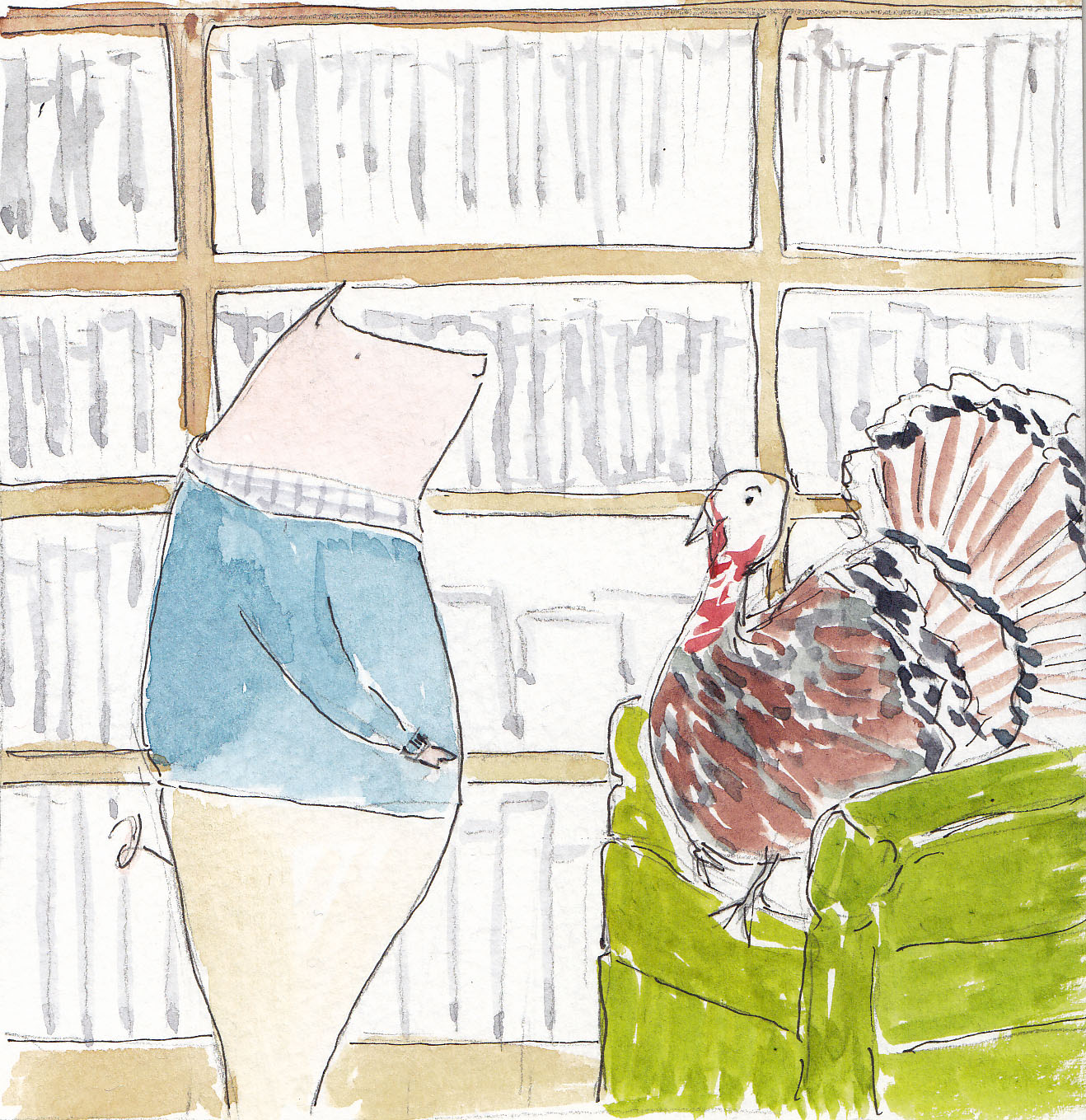 In case you are looking for old Le Jambon.com entries, we are having technical difficulties. Henri is not happy about it either.